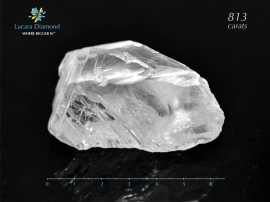 Thomas Biesheuvel at Bloomberg writes that, "More than half of the biggest diamonds in the past decade have been found in the last two years," and Canadian miner Lucara Diamond Corp. unearthed three of them just last month from its Karowe Mine in Botswana. Still, of the hundreds of millions of diamonds unearthed over the past decade, only about a dozen larger than 250 carats have been found, based on a Bloomberg review of company disclosures. They are so rare that miners aren’t always sure they’re making the best deal. Lucara, for instance, has yet to put a price tag on its 1,111-ct monster, the second largest in history. Indeed, when miners dig up the world’s largest and rarest diamonds, figuring out what they are worth can prove to be difficult. "There's no such thing as an accurate valuation on these stones," as Brandon de Bruin, head of sales at Gem Diamonds, told Bloomberg in Antwerp, the center of the world diamond trade.

Traditionally, miners prefer selling their rough diamonds directly to firms that cut & polish them, because they are easier to sell that way and cutters can get stuck with diamonds for years before finding a buyer willing to pay the right price. Mining companies don’t usually employ their own cutters and don’t know what it will cost to convert them into polished diamonds. Gem Diamonds, which in the past decade has uncovered four of the 20 largest white gem-quality diamonds ever found, is seeking to change that dynamic. They have started replicating on a small scale what middlemen normally do. By cutting and polishing a small amount of its own output across the street from its Antwerp sales office, it can better analyze the process of converting rough stones into polished diamonds, and get a better sense of their value on the market. Gem does not intend to expand the operation to handle all its mine output, de Bruin said. It just wants a small unit to better understand the market for bigger, rarer stones because it is producing more of them. “Prior to Gem going into production, the world didn’t hear about these large stones,” said William Lamb, the chief executive officer of Lucara. "Gem has paved the way for us in creating the market for these large stones.” Having a better idea of valuations would help set a benchmark others can adopt as the discovery of the largest stones accelerates.