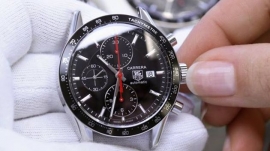 Business of Fashion reports that as the Swiss watch industry prepares for fourth straight year of little to no growth, big producers such as Richemont, the owner of Cartier, are trimming back investment in production while some smaller rivals look for a buyer or risk going under. The world’s biggest watch-producing country will register a 2% increase in shipments next year, according to the median estimate of 11 analysts in a Bloomberg survey. That’s the same rate of 2013 and 2014, a far cry from growth of about 20% in prior years. “The motors are missing,” said Andre Bernheim, chief executive officer of Mondaine, an independent watchmaker that makes timepieces designed after Swiss railway clocks. “All the main regions in the world are showing problems, from the U.S., Europe, to China.” The slowdown may draw a line between the companies that haven’t prepared for a slowdown and larger watchmakers such as Swatch Group AG and Cie. Financiere Richemont SA that have built up cash piles to protect themselves."

“Only the strong brands will survive,” said Zuzanna Pusz, an analyst at Berenberg. “Good brands that are financially struggling may be bought.” The market has doubled since the turn of the century, fueled by demand from the Chinese, who have accounted for as much as half of spending on Swiss watches, according to Citigroup estimates. With China’s gross domestic product growth slowing to a six-year low, the industry has been in retreat. “The Swiss watch market was on steroids, driven by the gifting policy in China at the time,” said Brian Buchwald, chief executive officer of Bomoda, a market researcher. The industry, which accounts for a 10th of Switzerland’s exports, has also been hurt by the surging Swiss franc, which forced many brands to cut prices in export markets to stay competitive. “What we’re seeing is a normalization,” said Rene Weber, an analyst at Bank Vontobel AG. “We’ll never have boom years like we’ve had again.”