Dominion Diamond Forging Ahead with Ekati Mine Expansion 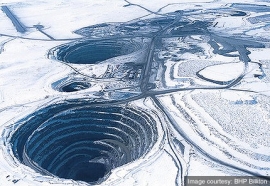 Despite a concerted effort to trim costs at all of its operations, Dominion Diamond Corporation says it still plans to start building a new pit at its Ekati diamond mine next year. The pit, called Jay, could help the mine stay in production until 2033. "It wouldn't surprise you to know that we are reviewing our cost structure, looking at all of our capital sustaining and development capital to make sure that we are only spending money we absolutely have to," said Dominion CEO Brendan Bell. Dominion, which also owns a minority stake in the Diavik diamond mine, has cancelled diamond exploration drilling it had planned to do near Ekati in 2016.

It's also looking to trim operational costs at the current Ekati mine, negotiating deals with fuel suppliers so that it only has to start paying for delivered fuel once it starts burning it. "We know that we need to get to a sustainable lower cost base to make future projects like Jay as profitable as possible," said Bell. Dominion still plans to begin building Jay as soon as it has the permits it needs, says Bell. The project's environmental assessment is due to wrap up soon, with the Mackenzie Valley Environmental Impact Review Board expected to provide its decision in January. Provided the project is approved, the Wek'eezhii Land and Water Board will issue the permits Dominion needs to start building Jay. Dominion expects that to happen toward the end of 2016, with production at Jay beginning in 2021.