NWT Thanks De Beers for Investment in Community at Snap Lake 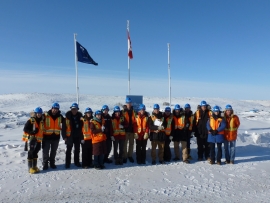 Gary Vivian, President of the NWT & Nunavut Chamber of Mines, posted an open thank-you note - bereft of irony - to De Beers for their investment at Snap Lake. The timing may seem odd, as only ten days ago De Beers announced that it was putting the Snap Lake mine on care & maintenance, with more than 400 people losing their jobs as a result. But Vivian wanted to point out what many fail to realize - namely, the tremendously positive socio-economic impact that the mining giant has had on the tiny NWT community in Canada. He calls De Beers' contribution "unthinkable", particularly when considering that "they have done all of this despite not being able to turn a profit." So, what did they do, precisely? "De Beers came to the NWT in 2005 and brought with them $975 million of their own money to build a diamond mine. They spent that, and went on to spend over $2.3 billion to construct and operate the mine."

"Through their supportive northern business policy, they spent over $1.5 billion with northern businesses and joint ventures. Last year alone, Snap Lake spent $126 million with northern companies, including $50 million with Aboriginal businesses and joint ventures. This has helped these companies employ even more people and it has generated significant taxes along the way to governments, including the Tlicho Government. Over this same period, De Beers provided employment for over 700 people annually. These are some of the highest paying jobs in the country, with generous northern cost of living allowances, pensions and medical plans. They have provided employees with professional counselling, family support, financial planning support, health coaching, smoking cessation, relationship support, stress management and alcohol and drug awareness training. The mine provided over 7,000 person years of meaningful employment over the life of the mine. They have also invested in training programs, both on site and off site, to help more northerners get jobs" ... "In 2014 alone, they spent a quarter million dollars to support events, programs and activities in 11 NWT communities to support arts, culture and heritage programs as well as a book program to promote literacy."