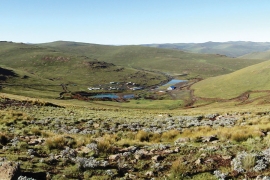 Paragon Diamonds Limited's has been attempting to acquire a majority stake in Lucara/Lesotho's Mothae mining project since May 2015, and the Lesotho government approved the acquisition back in August. Paragon agreed to pay Lucara Diamond Corp. $8.5 million for its 75% stake in Mothae, and Lucara was to receive 5% of the profits from the sale of polished diamonds from Mothae and 5% of the profits achieved from the sale of rough diamonds not selected for polishing. It was announced in October that Paragon had secured $15 million in funding for the aquisition, but on November 17 it turned out that Paragon had no money. Lucara already granted an extension to them once, but has now tired of waiting, and has called off the proposed sale. Now Paragon is going to negotiate directly with the Government of Lesotho to keep its proposed acquisition of the Mothae kimberlite resource alive.

Paragon admitted that finalising funding for the deal had taken longer than expected, but maintains the view that the development of Mothae is highly synergistic with its Lemphane kimberlite pipe project, hence its decision to negotiate directly with the Government of Lesotho, which controls the definitive approval on any transaction in respect of developing Mothae. “It is the board’s belief that the termination of the agreement with Lucara will not have material impact on the terms of any such funding obtained from the afore-referenced investor.,” Paragon said. One analyst has called the whole situation a "comedy".