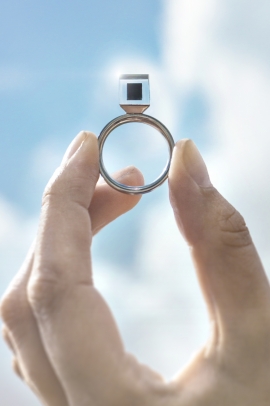 The city of Beijing just issued an air pollution red alert - the first time it has done so in history- as heavy smog blankets its skylines. Dutch designer Daan Roosegaarde might have a solution: he is in midst of negotiations to deliver to Beijing a seven-metre high “Smog Free Tower” that he says is the world’s largest vacuum cleaner, but said “It's a very sensitive, political topic.” Roosegaarde first presented the tower as part of his “Smog Free Project” in September in Rotterdam. The tower is capable of cleaning 30,000 m3 of clean air per hour by filtering pollutants with ion technologies, and it uses no more electricity than a water boiler. Roosegaarde is also the artist behind jewelry made of smog particles. By compressing the smog particles collected by the tower, which are mostly made up of carbon, he turns them into cubes that resemble diamonds. The first batch of the smog-cube rings was shipped out to customers earlier this month. The website says that by sharing a Smog Free Ring, you donate 1000m3 of clean air.