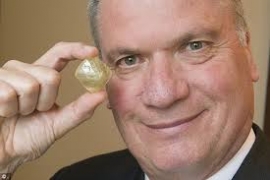 JCK's Rob Bates calls attention to some interesting comments made by De Beers CEO Philippe Mellier at Anglo American's December 8 "Investors Day", which included news of De Beers' parent company's radical restructuring plans. The main takeaway is Mellier's deflection of recent criticism. Bates summarizes the CEO's message as follows: "The current crisis is not De Beers’ fault. Midstream profitability issues stem from banks departing the industry and reduced sight financing, as well as a backlog at the grading labs, which led to an overstock at the beginning of the year." Mellier did not address any role producers may have played, but reportedly stated, “When things are tough, like in a crisis like this one, you have to blame somebody. The midstream has been fragile [for] two to three years [and] we knew that it has to restructure itself. This is a wake-up call.”

Mellier made some other significant remarks, writes Bates, particularly that, "De Beers will increase transparency. In a significant announcement, De Beers will—for possibly the first time in its history—communicate the volume of each sight after the sale, so that the market 'doesn’t rely on rumors'." He additionally proved softer on profitability issues: “We are mindful that the midstream has to generate profit. We have opened the gap between polished and rough, and I think there is profit available. Some of our clients, not all of them, are making money in the circumstances. It’s not a full disaster for everybody.” Mellier does not think reducing prices further would be a good idea, and, like everyone these days, is hopeful the industry will emerge from this crisis in 2016.