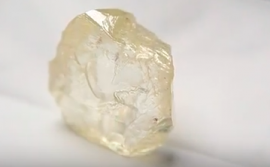 Press release: "Rio Tinto has unveiled one of the largest diamonds ever discovered in Canada. The 187.7 carat gem-quality rough diamond, known as The Diavik Foxfire, was discovered at the Diavik Diamond Mine in the remote Northwest Territories of Canada, 220km south of the Arctic Circle. The Diavik Foxfire diamond was showcased during an exclusive preview at Kensington Palace in London." Rio Tinto Diamonds managing director Jean-Marc Lieberherr has called it "a true miracle of nature.” The Diavik Foxfire will be showcased in London before returning to Antwerp for careful assessment and planning for the next stage of its journey.

The press release emphasizes Rio Tinto's engagement with local communities: "The Diavik Foxfire has also been bestowed an indigenous name, Noi?eh Kwe which references the strong ties to the land and its legacy. Grand Chief Edward Erasmus from the Tlicho government said 'I am very pleased that this has been named to honour the area of the caribou crossing, as this has been important to the Tlicho since time immemorial.' Local communities have been widely consulted about the operation and impact of the Diavik mine, with this engagement leading to considerable employment, training and capacity building opportunities." Diavik Diamond Mines president and chief operating Marc Cameron said “In a landscape so pristine and precious to traditional lifestyles, we have seen and continue to see an inspired collaboration between local indigenous people and a modern mining company.”