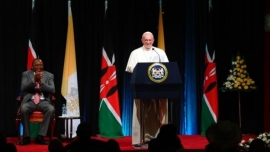 Pope Francis - in a speech on 26 November in Nairobi, Kenya to the regional UN headquarters during his first official trip to Africa - said that illegal trade in diamonds and other precious stones and metals, as well as the poaching of elephants for their ivory tusks, “fuels political instability, organized crime and terrorism.” He said that, “This situation is a cry rising up from humanity and the Earth itself, one which needs to be heard by the international community.” He also stated that, “We cannot be silent about forms of illegal trafficking which arise in situations of poverty and in turn lead to greater poverty and exclusion." The Guardian called it "a blistering attack on 'new forms of colonialism'." The Pope is also visiting Uganda and the Central African Republic (CAR), a diamond-producing state whose rough gems have been banned from the Kimberley Process.