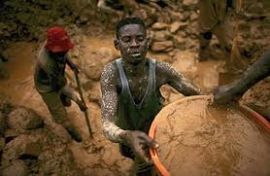 A new report by the Groupe d'Appui aux Exploitants des Ressources Naturelles (GAERN) in collaboration with Partnership Africa Canada (PAC) details "the atrocious acts committed by unauthorized government agencies in the artisanal diamond mines in rural Mbuji- Mayi, a town in Kasaï-Oriental Province, Democratic Republic of the Congo." The report presents the results of a field study of artisanal diamond mining sites that interviewed almost 500 people from ten sites in the town, and draws damning conclusions about the level of corruption, extortion and even physical abuse that leaves the mining population poor and intimidated. Despite being called "the industrial diamond capital of the world', mining has resulted in no socioeconomic development in the province. The report focuses on a very small sample size (DRC numbers 200,000-300,000 miners), and makes no claim to be representive of the entirety of diamond mining in the DRC.

The primary issue is the unchecked presence of unauthorized agencies at the diamond mining sites - including the National Information Agency, Congolese armed forces and Congolese National Police - that continually disrupt mining activities by confiscating gravel and diamonds, seizing property, extorting money, arbitrary arrests and even murder. The report states that, "In terms of the collection of taxes and fees from artisanal diamond miners, the situation is catastrophic." Miners are consistently deprived of the fruits of their exhausting labor, earning less than $500 a year. "Miners are no better off than they were before finding a diamond, and they remain trapped in a vicious circle of poverty." The NGOs make several recommendations as to how the government of the DRC could implement measures to transform artisanal diamond miners into operators who actively contribute to the local and national economy.