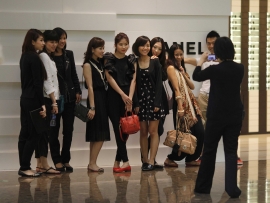 In the last ten years, China’s share of global luxury spending went through the roof, rising from 3% to 30%, leading to overly optimistic growth and consumption projections, a report by the Demand Institute says. In China, the Financial Times reports, big brands are struggling, due to the current economic slowdown combined with a government crackdown on lavish spending and changing consumer preferences. Analysts say Chinese consumers have become more focused on their personal interests, experiences and homegrown brands rather than making purchases simply because of the brand name.

According to the FT, bullish expectations led top luxury brands to open up numerous stores, even in tertiary cities. But the majority of Chinese consumers have a long way to go before reaching middle class status, the Demand Institute report says, and are not able to afford top brand luxury items. High-end luxury brands have not only shut down underperforming branches in China, but are also focusing more on Chinese tourists, who accounted for two-thirds of the total US$65 billion Chinese luxury spending last year.