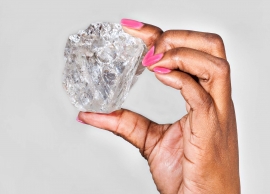 William Lamb, chief executive officer of Lucara Diamond Corp., told Bloomberg Business that he wants "more than $60 million" for the 1,111-ct diamond, the largest discovered this century and second largest ever. How much more is anyone's guess. “A lot of people will use use $60,000 a carat as the basis,” Lamb said. “On top of that, you have to look at the size of the final polished diamond as well as the historical context. That’s going to play into it too.” The CEO, who has already turned down an offer of more than $40 million, said the company has been approached by London’s Natural History Museum about displaying the stone and the Discovery Channel who are interested in making a documentary about it. The Vancouver-based company isn’t in a rush to sell because it has no debt. “The diamond sector is not full of opportunities, so for us to run out and sell it now doesn’t really make sense,” Lamb said. “We have the time to look at what is the best way to sell it. Not selling it is actually an option.”

Thomas Biesheuvel writes that exceptionally large rough diamonds can sell for about $60,000 per carat, though Lamb hopes that its status will boost its value. The first Lucara worker to touch the stone was at the time the only person still alive who’s handled a 1,000-carat diamond, he said. Lucara’s Karowe mine in Botswana rivals Gem Diamonds Ltd.’s Letseng operation in Lesotho as the place to find the biggest and best stones. Gem Diamonds previously held the record for the largest stone discovered this century with the 603-carat Lesotho Promise. Lucara in July sold a 341.9-carat diamond and a 269.7-carat gem for just more than $60,000 a carat. Gem Diamonds offloaded a 357-carat stone for $19.3 million in September. As for how it might be cut, Lamb said that as well as one “significant” single polished stone, there’ll be other offcut pieces as large as 20 to 30 carats each worth millions of dollars. The Lesotho Promise produced 26 flawless diamonds, including a 76.4-carat pear-shaped gem.