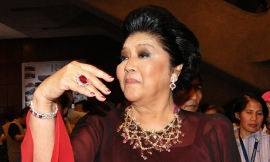 The auction house reports a rare 25-carat barrel-shaped pink diamond has been found among the jewelry collection of former Philippine first lady Imelda Marcos. The government asked the auctioneer to appraise her collection of rare stones ahead of a possible sale. The collection comprised of three sets of jewelry confiscated almost three decades ago after the fall of Imelda's husband, the late dictator Ferdinand Marcos is being appraised by Christie's and Sotheby's.

David Warren, director of jewelry at London-based Christie's, said the piunk stone could be valued at $5 million and would significantly increase the value of the entire collection if the collection is auctioned. The three sets in the collection were valued at $6 million-$8 million in 1991. Only three pure, vivid pink diamonds weighing more than 10 carats have appeared for sale in almost 250 years of auction history, according to Christie's.