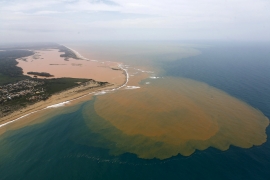 On November 5, two dams at an iron-ore mine owned by Samarco Mineração SA - a joint venture between two of the world's biggest mining companies, Australian BHP Billiton and Brazilian Vale SA - collapsed in Brazil. Almost 16 million gallons of toxic sludge escaped, sending a deluge of hazardous mud into a tiny town called Bento Rodrigues and starting the journey down the Rio Doce River. Bento Rodrigues was completely devastated, eleven people were killed with 12 more missing and presumed to be dead. When the dams broke, it set in motion a chain reaction of events that the environment minister, Izabella Teixeira, described as “the worst environmental disaster in Brazil’s history.” President Dilma Rousseff compared the devastation to the 2010 BP oil spill in the Gulf of Mexico. A slow-moving tide of toxic iron-ore residue has been oozing downriver, polluting the water supply of hundreds of thousands of residents and has now reached the ocean at the mouth of the Rio Doce.

Shares in BHP Billiton, a FTSE-100 company and therefore a key holding of pension funds around the world, have been battered. Some $12bn has been wiped off the value of the company as its shares in the UK and Australia have slumped by an average of 14%. Ibama has announced a preliminary fine of 250m reals (US$66m) for Samarco, but the final cost – the financial and reputational damage – will be much, much higher. Ramos stressed that the fine did not include the cost of the clean-up operation, lawsuits and compensation payments. The Brazilian financial magazine Exame, quoting an anonymous government source, said the total cost was likely to run to between R$5bn-R$10bn ($1.3bn-$2.6bn). There will also be operational losses: the Minas Gerais mine produced more than 5% of BHP Billiton’s iron ore output and about 3% of the group’s earnings. Now Samarco has also been stripped of its mining licence.

The chief executives of BHP Billiton, Andrew Mackenzie, and Vale, Murilo Ferreira, offered apologies for the disaster and insisted they would honour their obligations as joint owners. The government itself has come under criticism for the sluggish nature of its response. Critics point out it took President Rousseff a whole week to visit the region, while the conservative daily Folha de São Paulo pointed out that the state body responsible for monitoring the country’s dams, the DNPM, checked each of them only once every four years. Despite the importance of mining to the Brazilian economy, the DNPM only has 220 inspectors charged with monitoring 27,293 sites nationwide. Last year, three workers were killed at a dam near the area of last week’s accident.