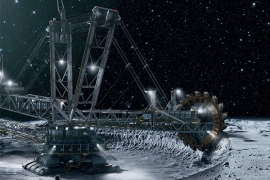 After much delay, an important space bill has finally passed in the Senate. The Space Act of 2015 (H.R.2262 - U.S. Commercial Space Launch Competitiveness Act) would give companies the rights to the resources they might one day extract from asteroids, such as platinum, water and, of course, diamonds. The bill has passed in the Senate with unanimous approval and will now be sent to the House of Representatives, which is expected to approve the changes, and then on to President Obama who is expected to sign. The U.N. Outer Space Treaty declares that "outer space shall be free for exploration and use by all States", but that it "is not subject to national appropriation by claim of sovereignty." This does not mean, however, that the resources obtained in space cannot be owned, which is precisely what the U.S. Space Act addresses.

The act reads: “A U.S. citizen engaged in commercial recovery of an asteroid resource or a space resource under this chapter shall be entitled to any asteroid resource or space resource obtained, including to possess, own, transport, use, and sell the asteroid resource or space resource obtained," and clarifies that "The term ‘space resource’ means an abiotic resource in situ in outer space." In other words, companies cannot own any aliens they might find out there. It also affirms that the U.S. "does not thereby assert sovereignty or sovereign or exclusive rights or jurisdiction over, or the ownership of, any celestial body." However, this points to one of the problems with the bill, according to Michael Listner, lawyer and founder of the consulting firm Space Law and Policy Solutions. Because the U.S. can't own property in space, it can't really dole out rights to pieces of that property.