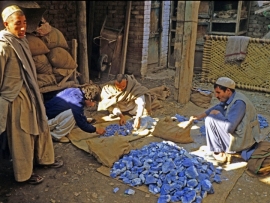 Last summer, Ozy published a story on efforts to revitalize and legitimize the mining and polishing of gemstones in Afghanistan, a trade which, if successful, could contribute to its wrecked economy. Afghan emeralds are considered among the finest in the world by some international experts, but while the country therefore has potential to grow within the colored gemstone market, it is difficult to mine and process the stones given the precarious political situation in this still war-torn country. Furthermore, the World Bank estimates that 90 to 99 percent of all gemstones mined in Afghanistan are smuggled out of the country. This has not stopped local tradesmen from cutting their own stones in increasing numbers, and the Turquoise Mountain Institute in Kabul has started a program to train gem cutters.

This is taking place against a background of Taliban warlords fighting to control the black market economy. As the Small Wars Journal wrote just a few days ago, "Northern Afghanistan has witnessed large scale attacks by Taliban militants, the fall of Kunduz, and the large seizure of land in Badakhshan province  by insurgent forces. Badakhshan province is home to much of Afghanistan’s gem and emerald wealth. It is no coincidence that the Taliban’s efforts this fighting season have been centered on strategic locations with valuable resources. Insurgents have launched massive coordinated attacks, including in Badakhshan, a region rich in lapis lazuli gems."

As Reuters writes today, however, the government of Afghanistan aims to deprive Taliban militants of funds from smuggled exports of the prized blue gemstone, lapis lazuli, by creating its own bourse to sell the stone. Afghanistan loses roughly $100 million a year through gemstone smuggling, more than the total exports of commodities like coal and industrial minerals like talc, said the country's mining minister Daud Saba. Halting smuggling of emeralds, rubies, jade and other material would be tough, he said, but lapis lazuli trade can be controlled as the stone with unique qualities comes from one mine, Sar-i-Sang, in northern Afghanistan. The government is working to set up a bourse in Kabul by mid-2016 as a single source for lapis lazuli, which would come with a government certificate. "We have the monopoly on that type of lapis. That stone has a signature," Saba said. "And then any other lapis with no certificate should be banned by the international community, as they have done with blood diamonds."