Indonesia's Cempaka Diamond Mine in Pictures 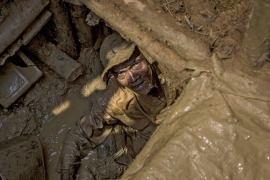 BDI Mining Corp. a subsidiary of Gem Diamonds, has interests in the Cempaka alluvial diamond mine, one of Indonesia's largest diamond mines. In 2006, BDI discovered a 3.02 carat fancy coloured intense-blue diamond and reported recovering 50,000 carats of gem quality diamonds that year. Gem Diamonds elected to suspend mining operations in 2008 due to waste water discharge issues, but this has not stopped freelance treasure hunters from mining the site. Ulet Ifansasti, an Indonesian photographer who went down to the mine to shoot for Getty Images, told Mashable that he met miners aged 17 to 70. The life of a diamond miner can be fraught with danger, Ifansasti pointed out. Approximately 400 of them have died at Cempaka since 2000 due to landslides caused by soil erosion from digging. There are also disputes over territory, said Ifansasti. "It's open to all, everybody can go (to the mine), and workers, they fight for the land."