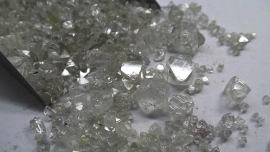 Stellar Diamonds plc, the London listed (AIM: STEL) diamond development company focused on West Africa, is pleased to announce that it has formally submitted to the National Minerals Agency (NMA) of Sierra Leone its application for a large scale mining licence for the Tongo project. The move comes after the World Health Organization's announcement earlier this month that Sierra Leone is Ebola-free after 42 days without any new infections. The Tongo kimberlite diamond project is forecast to yield 840,000 carats and revenues of $358 million. CEO Karl Smithson believes the mining licence will be secured in early 2016, and the company will aim to secure about $25 million in funding to progress mine construction and infrastructure to allow for first production at the end of the first year. The miner says the project will create 500 jobs and will have a social impact on at least 5,000 people contributing towards the post-Ebola economic recovery in Sierra Leone.