Indian Stars And Businesspeople Suing For Return Of Koh-i-Noor 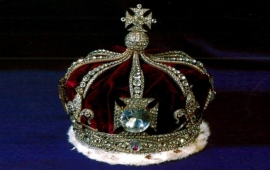 Bollywood stars and businessmen are coming together to start legal proceedings in London’s High Court for the return of the 105-carat Koh-i-Noor diamond, which they say was stolen from its true home. The move could result in some awkward moments at a lunch the Queen is hosting for Indian Prime Minister Narendra Modi at Buckingham Palace this week, although a Royal source said the row was strictly off the agenda, according to the Daily Mail.

David de Souza, of the Indian leisure group Tito’s, who is helping to fund the fight, said: "The Koh- i-Noor is one of the many artifacts taken from India under dubious circumstance." The diamond was presented to Queen Victoria by the last ruler of the Sikhs, Duleep Singh, in 1851 after the British annexed the Punjab. The handing over of such a revered gem is still considered a national humiliation in India.