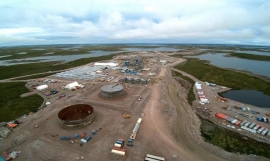 Diamond industry analyst Paul Zimnisky has published a thorough "State of the Diamond Mining Industry" report as we near the end of 2015 - essential reading, in our opinion. "So far in 2015", writes Zimnisky, "the state of the global has been closely aligned with the posture of the global economy, as it so often is, and should be. The developed nations of the world are growing, but at uninspiring rates... Emerging market growth has slowed... The result in the diamond industry has been an overhang of low-to-medium-quality polished diamonds in the market for about a year now. U.S. diamond demand growth has been relatively healthy over that time, but demand growth in China, parts of Europe, and Japan has been softer, congruent with their economies. Recent financial market weakness in China, in particular, has directly impacted demand for diamonds."

His article adresses the current state of affairs among many of the major miners: De Beers, ALROSA, Rio Tinto, Petra and Lucara. Almost uniformly across the industry, production is down, prices/carat are down, and buyers are wary. Furthermore, "With rough diamond prices down over 12% YTD... share prices of diamond miners have been punished by investors", despite some companies showing impeccable health. Zimnisky reports on the good (Stornoway +26%), the bad (Dominion -34%, Gem Diamonds -44%), and the ugly (Petra -58%)... and everything in between. What remains is the end-of-year push: "For the remainder of 2015 and into early 2016, diamond prices will be sensitive to the actual resulting demand of the global holiday season, beginning with Diwali in November, Christmas in December, and concluding with the Chinese New Year in February."