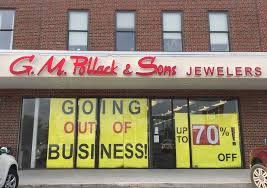 Rob Bates of JCK reports that the consolidation trend in the U.S. jewelry industry continued in the third quarter 2015 with closures jumping 25% over last year, according to statistics compiled by the Jewelers Board of Trade. Some 276 U.S. jewelry businesses ceased operations, compared to 214 in Q3 2014 (this is out of 29,404 total business listings, according to Bates' info from JBT). That number includes retail jewelers, wholesalers, and manufacturers. The main category of companies ceasing operations was retail jewelers. JBT says 237 US retail jewelers shut their doors in Q3, up 42% from last year. So far, 599 U.S. retail jewelry stores have closed shop in 2015, a 30% jump from the 455 closures recorded in 2014.

Bates reports that U.S. business discontinuances—the overall JBT number that includes companies that ceased operations, consolidated (i.e., sale or merger), or declared bankruptcy—also jumped 25% in the last quarter, to 318.  So far, the year has seen 844 U.S. jewelry business discontinuances, compared to 735 the prior year, a 15% increase from 2014, which also saw heavy consolidation. On the bright side, 74 U.S. companies entered the industry in this past quarter, a 25 percent jump over last year. The number of companies joining the business has increased 3.7 percent for the year.