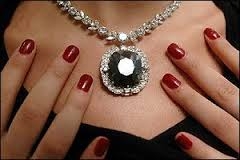 In the spirit of Halloween - or All Saints' Day, if you like - we take a look at some of the curses and legends that revolve around some of the world's most famous diamonds. The very fact that these legends have been passed down through the ages testifies to the mystique, allure and intrigue that makes these stones so precious. (See images attached...if you dare).

“He who owns this diamond will own the world, but also know its misfortunes. Only God, or a woman, can wear it with impunity.” Rich in history and controversy, the “Mountain of Light” dates back to ancient India when it was said to have been stolen from the god Krishna himself. Afterward, a curse was placed on the then 186-carat stone to bring ailments and sudden, untimely death to any man that wears the Koh-I-Noor. Only women and gods are immune to its curse. Sher Shah Suri is said to have died in a cannon explosion shortly after coming into possession of the stone. His son, Jalal Khan, was then murdered by his brother-in-law some years later and it is rumored Khan died while clutching the diamond. The stone fell into British hands after they took control of the Punjab region of India. It has since been worn only by women of the British royal family.

With its striking color and jaw-dropping size, the Hope diamond has intrigued and captured the attention of all who come into its presence for centuries. The Hope diamond legend states the curse was given life by a thief named Tavernier, who plucked the gem from a statue of the Hindu goddess Sita while traveling through India. Tavernier made his way to Russia and was killed by a pack of rabid dogs. All who have come into contact with this stone have suffered a gruesome, tragic death. Possibly in an effort to save lives, it now sits on display at the Smithsonian Institution.

Definitely not a girl's best friend, it was stolen by a monk from a Hindu shrine and sold to a woman who would fall to her death within months. At the turn of the 20th century, Princess Nadia Vygin-Orlov came into possession of the diamond. Fleeing Russia during the country’s revolution, the princess is said to have leaped to her death from a building in central Rome. Numerous attempts have been made to break the curse by reducing the size of the stone, but each woman who has gained even a fraction of it has jumped to her death in an apparent suicide, prompting several to decline acceptance of their well-intended gift.