Diamond-Set Guitar Worth $2M on Display in Abu Dhabi 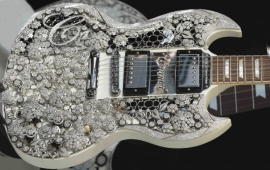 The Eden of Coronet guitar, estimated to be worth $2 million and the world’s most expensive guitar, has gone on display in Abu Dhabi. The musical instrument has been officially named the ‘Most Valuable Guitar’ by the Guinness World Records and is set with 11,441 diamonds and 1.6kg of 18K white gold. The guitar was created in collaboration with UAE-based Lifestyle Fine Jewelry’s parent company, Aaron Shum Jewelry, and designer and songwriter Mark Lui using a Gibson guitar.