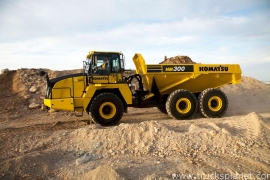 The prolonged slump of the world's largest construction and mining equipment company, Caterpillar (U.S), which last month announced a major restructuring, stating that it would slash 10,000 jobs through 2018 and close facilities worldwide, is well-documented. Slower Chinese economic growth and Brazil's recession dented company revenues as sales in all three of its major business segments fell. Today, Caterpillar's biggest rival, Komatsu (Japan), reported a 19% decline in second-quarter profit as China’s woes and the bust in commodity prices cut into sales to miners and builders. By region, Komatsu also saw the biggest drop in construction and mining equipment sales in China, with a 44% decline for the six months to Sept. 30. Sales fell 2.1% in Japan and 16% in Latin America, while they surged 28% in North America, the company said. “Mining customers are cautious about investment in new equipment,” Komatsu’s Fujitsuka said. “The market conditions will remain tough in 2016 and 2017.”