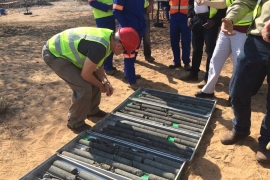 The Wall Street Jounal takes an inside look at De Beers' efforts to uncover the first major diamond mine in at least 20 years, an exploration drive that started in earnest last year in the southern desert of Botswana. "De Beers’ undertaking highlights the dilemma faced by diamond miners," writes Scott Patterson of the WSJ, "who are forecasting diminishing supplies if they don’t discover new caches of gems. Only a blockbuster discovery will enable them to keep long-term production at current levels, according to De Beers and analysts. The problem: Only a fraction of the world’s underground diamond deposits are large enough to justify the expense of harvesting them." Failing a major discovery, production is expected to go into long-term decline starting around 2017, if it has not started already. Obviously, De Beers is not the only company searching, so the search is far and wide, but as De Beers geologist Charles Skinner says, “On the odds side, the deck is stacked against you.”

"A discovery of a major new source of diamonds won’t solve De Beers’ near-term woes," writes Patterson, "or those of its struggling parent company, Anglo American. But it is crucial to the company’s long-term future." This is not to say that diamonds sources will be depleted in a few years - the Gahcho Kué Mine in Canada, for instance, is due to enter production next year, and is expected to produce about 4.5 million carats a year over 11 years - but production at many existing mines has already peaked. Making that next big find is not just a matter of chance, as the company employs massive amounts of data, new technology and, as Skinner says, "perseverance".