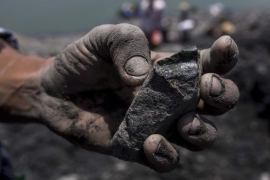 Global Witness has issued a major report, "Jade: Myanmar's 'Big State Secret'", revealing an industry far bigger than previously thought, worth up to US$31 billion in 2014 alone (for the sake of comparison, the value of 2014 global diamond mining is estimated at $14-18 billion). That is equivalent to nearly half the GDP for the whole of Myanmar, but hardly any of the money is reaching ordinary people or state coffers. Instead, the sector is secretly controlled by networks of military elites, drug lords and crony companies associated with the darkest days of junta rule.

From the Executive Summary (in annex): "Drawing on over a year of investigations, this report shows for the first time how a multi-billion dollar trade in one of the planet’s most precious gemstones is tightly controlled by the same military elites, US-sanctioned drug lords and crony companies that the government says it is consigning to the past. Companies owned by the family of former dictator Than Shwe and other notorious figures are creaming off vast profits from the country’s most valuable natural resource, and the world’s finest supply of a stone synonymous with glitz and glamour. Meanwhile, very few revenues reach the people of Kachin State, the site of the Hpakant jade mines, or the population of Myanmar as a whole. As the country approaches an historic election, the importance of these findings to Myanmar’s future is hard to overstate."

"The sums involved in what one industry representative calls “the government’s big state secret” are staggering. Until now the jade sector’s worth has been almost impossible to determine. However, based on new research and analysis, Global Witness estimates that the value of official jade production in 2014 alone was well over the US$12 billion indicated by Chinese import data, and appears likely to have been as much as US$31 billion. To put it in perspective, this figure equates to 48% of Myanmar’s official GDP and 46 times government expenditure on health.

Clearly, if openly, fairly and sustainably managed, this industry could transform the fortunes of the Kachin population and help drive development across Myanmar. Instead, the people of Kachin State are seeing their livelihoods disappear and their landscape shattered by the intensifying scramble for their most prized asset. Conditions in jade mines are often fatally dangerous, while those who stand in the way of the guns and machines face land grabs, intimidation and violence."