Liquidators Trying To Dump Ellendale Diamond Mine (Australia) On State 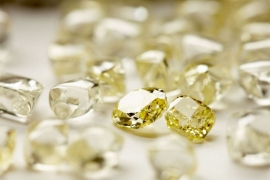 In the lastest dispute about the shuttered Ellendal diamond mine, a West Australian mine that until recently produced about half the world's supply of rare yellow diamonds, liquidators are attempting to offload the mine onto the state. Kimberley Diamonds, which had a history of failed royalty payments to the WA government, announced on 1 July that it was suspending operations and placing the subsidiary company which operated the mine into voluntary administration. Now, liquidators at Jirsch Sutherland have filed a “notice of disclaimer of onerous property” with the corporate watchdog, kicking off the process of handing back the mining and general purposes leases covering Ellendale to the Department of Mines and Petroleum.

It is understood Jirsch Sutherland is seeking to end the costs of providing security and care and maintenance services at the mine, estimated at up to $100,000 a month, to preserve funds for distribution to staff and trade creditors. But the surprise move would also dump the responsibility for maintaining Ellendale’s environmental obligations, as well as rehabilitation liabilities estimated at $28 million by the company and up to $40 million by DMP, onto the Mining Rehabilitation Fund. The West Australian writes that, "It is understood Jirsch Sutherland’s attempt to quit Ellendale is the first time in recent memory those provisions of the Corporations Act have been used in relation to a WA mining project. Other mines have gone bust since the MRF was introduced in mid-2013, but all have remained in the hands of liquidators until a buyer could be found."