Sotheby’s: Once In A Blue Moon 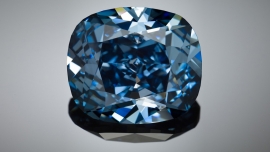 'Once in a blue moon' is a way of saying something happens only very rarely. So when a South African mine announced it had found a large rough blue diamond, there was really no other name for the polished stone. “Only 0.01% of the entire production of the [Cullinan mine] is any shade of blue and this stone is vivid blue so it really is off the scale,” says David Bennett, worldwide chairman of Sotheby’s international jewellery division, adding that only a handful of blue diamonds of this size and quality exist. The 12.03-carat flawless Blue Moon diamond, which started out as a 29.6-carat rough stone, is expected to fetch $35 million to $55m when it is auctioned in Geneva on November 11: it is the largest cushion-shaped fancy vivid blue diamond ever to appear at auction.

What separates this diamond from so many of its peers is its color saturation and shade, its clarity and its size. The 12-carat cushion-cut diamond has been given a color grading of “fancy vivid” with an “internally flawless” clarity grading from the Gemological Institute of America.