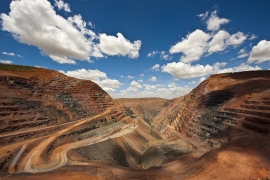 Rio Tinto will cut back its production of diamonds this year and focus on bringing more affordable jewellery to the Chinese market as ample supply and waning demand for the precious gemstones weigh on prices, writes Financial Review. The miner announced on Friday it would "pause final product processing in the fourth quarter at Argyle in light of current market conditions" and now expects to produce 18 million carats this year, down from its previous estimate of 20 million. Demand for diamonds and other luxury goods has been hit in China because of the slowing economy and as consumers eschew lavish displays of wealth amid a government crackdown on corruption and expensive gift-giving.

Still, Alan Davies, head of Rio's diamonds and minerals division, says Rio will continue to focus on China, an important market for them, particularly in light of the growth of fashion jewellery pieces that cost between $300 to $1000. "This suits Rio's Argyle mine in Western Australia, which produces smaller, more affordable diamonds", writes Financial Review. Earlier this year, Rio sold its 78% share in the Murowa diamond mine in Zimbabwe due to high taxation and the planned merger of the Zimbabwe diamond mines, but it also invested another $350 million in the the Diavik diamond mine in Canada.