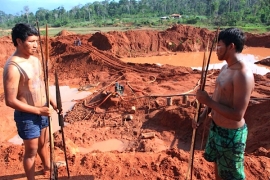 The InSight Crime foundation, in the latest of many reports over the years, writes that the Cinta-Larga indigenous group in Brazil is on the brink of collapse as a result of illegal mining in one of the world's (unconfirmed) largest diamond deposits in Roosevelt. The peak of the diamond rush in Roosevelt occurred in 2004, when there were more than 5,000 miners in the region. It was interrupted after the deaths of 29 miners. Since then, mining operations in the area have been closed and reopened on several occasions. The report details the tangled web of indigenous peoples, miners, corrupt intermediaries and international dealers that has put the Cinta-Larga in such a financial bind that they are "on the brink of genocide, if not physically, then at least ethnically and culturally", says prosecutor Reginaldo Trindade.

Diamond laundering (obtaining a Kimberley Process certificate by smuggling illegal diamonds to legal mines) is another major issue, with a web of different agencies, politicians, businessmen, and even multinationals widening the problem exponentially. Many are of the opinion that formalizing mining in the indigineous areas is the solution. Marcelo Cinta-Larga, chief of the Roosevelt village, says "We want mining to be legalized." Nine out of ten sources consulted for the report said regulation is the solution to the mining problem, including officials from the Public Ministry, Federal Police, indigenous residents, indigenous activists and even miners, who say the prefer to work legally.