DRC Diamonds of Prosperity And Development 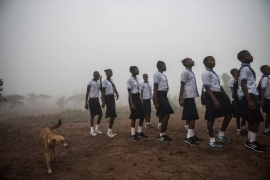 TIME’s Africa correspondent Aryn Baker, author of the recent "Blood Diamonds" article in TIME, takes a closer look at the pressing needs and promising developments in a diamond mining region in the Democratic Republic of Congo. There is clearly a long way to go - Congo is one of the least educated countries on the continent, with more than a third of the population unable to read or write and only 54% of children completing primary school, according to the United Nations Children’s Fund [UNICEF] - but Baker points out that with one of the U.S.’s best-known ethical diamond jewelry companies, Brilliant Earth, and the Diamond Development Initiative (DDI) leading the charge with its mobile school initiative, there is at least a ray of hope, however small.

Brilliant Earth, which does not use diamonds from Congo in its jewelry because it does not yet meet their stringent ethical standards, has invested $35,000 in the Lungudi school, one of two schools that make up the pilot project. Other companies have also signed on: Signet has just committed to fund six more schools over the next three years; the first two will open by the end of the year. DDI director Dorothee Gizenga says that they are considering opening a second in Lungudi, given the demand. “Our work is only a drop in the ocean. We need to do more, and will do more, if we can.”