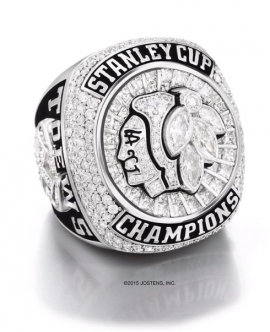 The Chicago Blackhawks received their 2015 Stanley Cup championship rings during a private ceremony Sunday. Each ring has 355 round, pear, marquise and princess-cut diamonds, totaling 10.8 carats, set in 14-karat white gold, the Blackhawks said. The top of the ring has "Stanley Cup Champions" around the Blackhawks logo; the left side commemorates their six Cup titles; and the right side features Chicago’s secondary logo and the player’s name and number. The ring was created by Jostens.