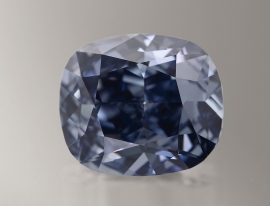 Sotheby’s will offer the Blue Moon Diamond, among the largest known fancy vivid blue diamonds, for sale at its auction of Magnificent Jewels and Noble Jewels in Geneva on November 11. The Blue Moon Diamond was cut from a 29.62-carat rough blue diamond found at Petra Diamonds' Cullinan mine in South Africa in January 2014.

The Internally Flawless, cushion brilliant-cut, diamond weighs 12.03 carats and has been graded by the GIA as a Fancy Vivid Blue – the highest possible color grading for blue diamonds. Sotheby’s said the diamond has a pre-sale estimate of $35 million to $55 million.