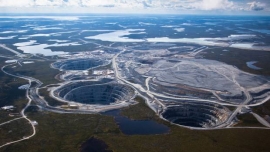 Dominion Diamond (DD) announced positive results of a preliminary economic assessment (PEA) for the Sable kimberlite pipe deposit located within the majority-owned Ekati diamond mine area in Canada's Northwest Territories, in which the Company holds an 88.9% interest. The PEA established a post-tax net present value of US$233 million at a 7% real discount rate, and an internal rate of return of 17.3%. The company said that the study has pegged initial development capital at US$147.4 million, sustaining capital at US$20.3 million and the base case diamond price at US$190 per carat. The Sable pipe is located beneath Sable Lake, 17 kilometres north-northwest of the existing Ekati mine infrastructure, and will require construction of an access road, site infrastructure, and sedimentation pond ahead of the start of pre-stripping operations.

Meanwhile, DD also released its financial results for the second fiscal quarter of 2016 (May through July), reporting an overall loss of US$17.6 million. Explaining its less-than-stellar Q2 results, DD cites "operational challenges experienced at the Ekati Diamond Mine process plant in Q1 fiscal 2016, which impacted margins in Q2," but claims that they "have been successfully resolved." DD also cites weak demand from Asia, their decision to lower prices in August as a response to softer demand from Chinese retailers, and the fact that the sale of carats produced from the Misery Northeast pipe during the pre-commercial production period was offset against production costs and not included in earnings.