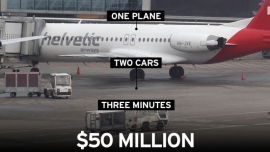 Four 'prominent' men from Geneva, including three real estate developers and a lawyer, will stand trial in November on charges of money laundering and embezzlement linked to the spectacular, $50 million diamond heist of an airplane in Brussels in 2013. Many of the stones, which were being transported from Antwerp to Zurich, were recovered in the first two months after the heist, while an undisclosed portion was sold on. The defendents include P., a real estate developer who is supected of having received hundreds of stones worth $7 million from the presusmed French gangster, which he concealed in the cellar of his building; a Geneva lawyer, who will face charges for (literally) holding the keys to the loot; and two friends of P. who will stand trial for having knowingly purchased some of the stolen goods.

P. as well as the Geneva lawyer had prior connections with one of the alleged robbers. P. has admitted his involvement but claims he did not profit from his actions and was not involved in the heist in Belgium. His attourney stated that, "He had no personal interest. On the contrary, he lost considerable sums of money. He bitterly regrets, moreover, that three of his close friends have been implicated and prosecuted wrongly in this unfortunate affair." The two other real estate developers that purchased the rough stones claim that the charges are unfounded.