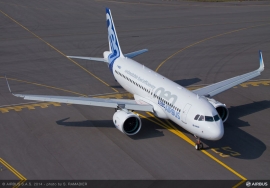 The High Court in Dublin has grounded an aircraft allegedly owned by a state owned airline of the Democratic Republic of Congo from leaving Dublin Airport in a dispute over an unpaid debt of €10m. The interim injunction prevents both the Democratic Republic of the Congo (DRC) and the airline the operates the aircraft, an Airbus A320 currently undergoing works in Dublin, La Société Congo Airlines, from moving, operating or otherwise interfering with the aircraft without their consent. The injunction also prohibits the aircraft's removal from the jurisdiction. US company Miminco LLC and two American citizens Mr John Dormer Tyson and Mr Ilunga Jean Mukendi sought the order. They are owed some US$11.5m (€10.1m) by the Congolese government.

The US parties say they got into a dispute with the DRC in relation to the ownership of two diamond mines they purchased in the African nation. Following an arbitration process in 2007, counsel said his clients were awarded some US$13m. However, Counsel said since then his clients have only been paid approximately US$1.5m of what is owed to them. It is proposed that a receiver will be appointed over the aircraft which will be sold to pay off the debt owed to his clients.