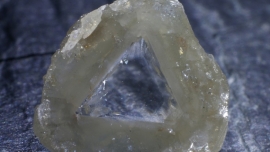 Microscopic, ugly diamonds from the Northwest Territories are illuminating how diamonds are made. A new study suggests they formed from ancient seawater trapped deep below the surface of the Earth. A group of U.S., U.K. and Canadian scientists think they have good evidence that a key component of the fluid that produced at least some kinds of diamonds was ancient seawater, trapped 200 kilometres beneath the surface of the Earth. Graham Pearson, a Univ of Alberta geochemist who co-authored the paper, acknowledged that the idea is a "fairly bold conclusion", but that researchers have evidence to back it up. That evidence comes from 11 diamonds from the Ekati mine in the Northwest Territories.

What remains a mystery is the relationship between the small, dirty diamonds that crystallize from seawater and big, shiny gem-quality diamonds. Pearson said that one possibility is that gem-quality diamonds form gradually through the slow metamorphosis of fluid-rich diamonds. Some evidence for this is the fact that there is a gem-quality centre inside many fluid-rich diamonds. Daniel Howell, a researcher at the U. Bristol who has done research on diamond formation but was not involved in the new study, said it builds a strong case for diamond-forming fluids starting off very salty and thinks the conclusions about diamond formation make sense for the Canadian diamonds used in the study. Whether they apply to other kinds of diamonds in other parts of the world "remains to be seen," he said in an email to CBC News.

The gory scientific details can be found here.