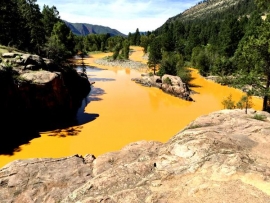 On Aug. 5, an Environmental Protection Agency cleanup crew accidentally spilled three million gallons of toxic gold mine waste into Colorado’s Animas River, turning it orange and sparking a state of emergency in the local area. The EPA crews were investigating contamination at the Gold King Mine in Colorado, which has been closed since 1923. They accidentally breached a barrier, causing decades-old mine waste to flood into the Animas River. News reports say the orange-colored sludge has traveled as far as Utah and New Mexico. An EPA sampling found elevated levels of arsenic, lead, and other possible poisons. The Animas River is not considered a source of drinkable water without treatment, though some local wells do source water from it. The river is also used for recreational activities, including whitewater rafting. Colorado Gov. John Hickenlooper has declared a state of emergency.