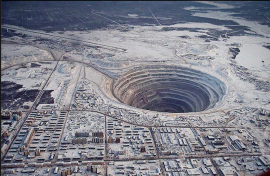 ALROSA has shifted operations at the iconic Udachnaya mine from open-pit to underground mining that will eventually yield 5 million carats a year. The company said it completed open-pit mining at the Udachnaya pipe earlier this month, having recovered 2.67 million carats of rough diamonds in the first half of 2015. The underground operation, which was first commissioned in June 2014, is expected to produce approximately 780,000 carats in 2015 and increasing to 5 million carats by 2019. The Udachny division consists of the Udachnaya mine, the Zarnitsa pipe, and various alluvial deposits located in western Yakutia region. Andrey Zharkov, ALROSA's president said. “The Udachny mining and processing division will remain one of the key production divisions of ALROSA and play a significant part in the implementation of the company’s long-term development program.” He added that the division has an indicated resource spanning about 50 years.